Have you noticed the total craziness that’s happening on this website? Depending on when you visit, the post may have shown without photos, given you an error screen, or, even worse, not shown you anything at all. Now that I have time to come up for air (sort of), I can finally give you the 411 on what’s happening.

Everything started with an error screen showing on both the front end (the part you see) and the back end (the part I edit) of DIY Adulation. That’s when it’s time to contact your host and when I did, it took a few days to find out what was wrong. Essentially there was a server corruption (I was not informed as to the cause) and it resulted in databases becoming broken and this also affected my backups.

It’s Fixed… Or Not

Through multiple back and forth conversations, I thought it was fixed only to find I couldn’t make any changes. Yikes! At this point something has to give so I change hosts and finally start getting some serious answers.

After another week we have found that databases in DIY Adulation are seriously broken. I could try to pay someone hundreds, or even thousands, of dollars to try to go in and manual repair it but there’s no guarantee even then. Instead of risking losing everything with more poking around and no promise that it can even be fixed, I’ve made the hard decision to go another route.

Nothing will change for you, but the doman DIY Adulation is on a new base completely. The problem is that it means I have to manually re-post every piece of content that has even been on DIY Adulation. It’s a slow and painstakingly tedious job but here’s the honest truth:

I love DIY Adulation and all of the wonderful people that are here with me, like you. It’s a beautiful resource full of awesome, supportive readers and I’m not ready to let it go.

What This Means for You

This means that while I get everything re-posted and moved from the old base of DIY Adulation, some links (okay, a lot of links) are going to lead to 404 errors. When you get that, it simply means I haven’t moved that content yet. I’m averaging about 30 posts a day and expect to have everything back up and going fully by the end of September at the latest. 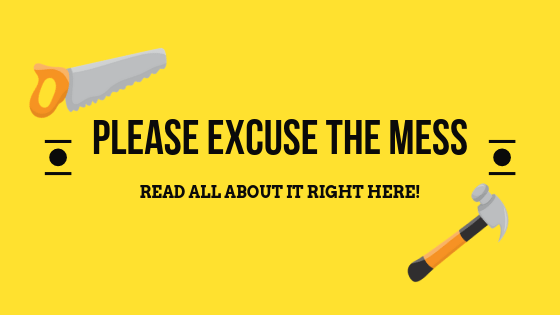 I’m asking you to please excuse the mess during this time of transition and know that it is all being fixed, slowly but surely. In addition, I will be posting new content while updating the old so keep checking back for the awesomeness you’ve grown to know and love! Thank you so much for your patience!

On the release of the new Star Wars movie I was not one of the people lines up around the corner of the movie theater to wait for tickets to see the show.  Instead, that evening I was out running errands to get things ready for little bit’s third birthday party taking place over the weekend.  At one store, the cashier nodded to my shirt and asked if I had seen the new movie yet.  In true oblivious form, I looked down at my shirt, confused, and realized I was wearing my awesome Hello Kitty Stormtrooper shirt (or I should say “one of them” because I actually own three).

I had a brief flash of chagrin as I looked up and quietly responded that I had not.  I left out the part that I don’t actually have any plans to see it.  The truth is that I’m just not really a big Star Wars fan (sorry, my amazing nerdy friends).  I do like Clone Wars and I know enough about the classic movies to get references to the “Who Shot First” debate or to enjoy The Star Wars Cantina by Richard Cheese, but as for the movies themselves, I just don’t get into them.  In fact, the only reason I own the shirt(s) is because I adore Hello Kitty and because I think Stormtroopers look cool.

The takeaway from a chick that hasn’t even seen the new #StarWars movie is that capes are impractical attire for heroes and villains alike. Click To Tweet

That is not to say that I didn’t give any thought to the hoopla surrounding the release.  It’s kind of hard not to unless you live under a social media-free rock.  However, the only takeaway from a chick that hasn’t even seen the movie (c’est moi) is this: Capes are impractical attire for heroes and villains alike.  If you don’t believe me, here are 5 thoughts for you to ponder.

If you’re running away from someone, there is not an extra 2+ feet flying in back of you.  Your pursuant can now grab your cape and take you down easier and with less exertion.  How is that practical?

If you can fly you are adding extra wind resistance.  Best case scenario, you’re slower in the air.  Worst case, you can’t stay airborne with the added resistance dragging you down.

Remember those extra feet we talked about in impracticality one?  Well, those extra feet can also get caught on things more easily.  If you sweep authoritatively into a room only to get your cape caught in an airlock door, you have just lost your edge and your authority.  It’s just not a good idea.

Even if the person you find yourself in battle with is unarmed, by wearing a cape you are giving the person a weapon.  All he or she has to do is grab your cape and they can strangle you with it.  Why would you choose to give them that advantage?

If you wear a cape your line of sight could be impeded at any moment by a gust of wind.  Heck, it wouldn’t even have to be natural.  Just a well-pointed fan toward your direction could do the same thing.  If you’re tailing someone and you walk over a subway great, that person just got away because you were momentarily blinded by your cape.  From a tactical standpoint, capes are just ridiculous.

Now that you have five thoughts to ponder over why capes are impractical attire, let me hear your thoughts.  Should capes be banned for villains and superheroes?  Or are capes an iconic staple in saving the world or taking it over?  Let me know in the comments!

See where I’m linking up!

If you’re looking for a fun nerdy craft, check out these Glow-in-the-Dark TARDIS boxers!  They are a quick and easy personalized gift.

If you’re lacking storage for all of your kids’ toys, then this DIY gift serves two purposes for you!  (Don’t you love gifts that multitask?)  A personalized toy box will make your kids ecstatic yet help you keep toys out of sight and rooms clean(er) as well.  If you’re handy with a saw and drill, then making a wooden toy box is certainly an option.  When you are on a tight holiday gift budget, though, even a DIY wooden one can be too expensive.  Here is an insanely fugal alternative for you: a cardboard toy box.

Chances are that you already have all of the materials for this lying about your house which would make this gift 100% free!  It is so easy to make and requires little, if any, cutting.  Plus, in the end, you will have a completely custom piece that you know will match your kid’s room.

NOTE: For this tutorial, while there are pictures of the actual boxes for reference, the steps will be demonstrated with card stock to clearly illustrate how this comes together.

Make sure your boxes are disassembled so that they lay flat.  Where each existing fold it (including single folds) fold both sides on those folds together as if it were one piece.

Sandwich the horizontal flaps (together) of Box B between the vertical flaps of Box B.  Secure with tape.

Secure the seam where Box B overlaps Box A with tape.

Secure the seam inside of your toy box where Box A overlays Box B with tape.

To form the lid, fold up flaps as pictured above and secure together with tape.

Prime the entire box with your latex primer paint.

If you are worried about the structural soundness of this toy box, I have already tested it to some extent for you.  The toy box pictured was actually a gift for my son last Christmas so it has already lasted a year and going strong.

I also had him sit on it now and it held all 63.8 lbs. of him.  This is, however, why you want to make sure that you use two boxes and don’t try to just cut up one box to use.  The double layer gives it that extra stability to help it hold up.

Again, this cost me nothing to make because I had all of the materials on hand.  This is a great way to get a terrific one-of-a-kind gift under the tree that costs you absolutely ZERO!  I would love to see how you decorate yours!  Share your creations with me on the Facebook page.